An Istanbul Hotel which cares about the Healty Organik Bread

Gluten is the name given to a group of proteins found in whole grains such as wheat, barley, rye, oats.
There are 30 kinds of protein in wheat and two proteins called glutenin and gliadin form a flexible substance called gluten when they interact with water.

The artificial interventions started from 1940s , the bread wheat seed which spread to the world today is now an issue that threatens the health of humanity.

Modern wheat obtained during the development of modern wheat poses a serious threat to human health, modern wheat makes us all sick, we must stay away from it. After the widespread consumption of modern wheat, celiac disease has become a terribly fast-spreading problem.

While the frequency of celiac disease was first expressed in 1953, it is estimated to be 1.15 percent in studies conducted in Turkey today.

Prof. dr. Canan Karatay says “Wheat is no longer 14 its 48 chromosomes, so it is effect the human health.

The glutinous fermentation ferment is also on the gluten level, but the gluten ratio in the wheat, which started to play with the genetics in the 1940s, has risen from 20% to 80% and is seriously threatening human health.

Meanwhile, at Faik Pasha Cafe, we make our bread by adding organic flour
The cost of 500 grams of bread is 10 TL more.
These freshly fermented breads are gluten-free, healthy and organic which we cook every day.
its make me feel peacful inside of me when i cook for my guest this healty bread. 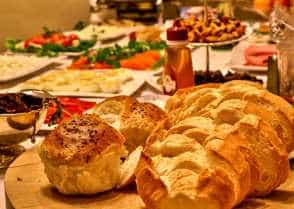